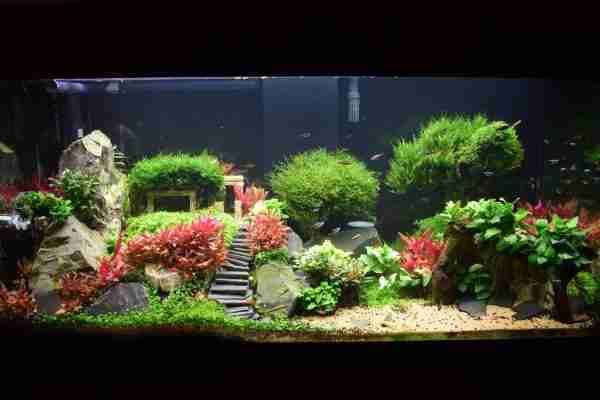 Years ago I found this beautiful movie: What Dreams May Come. It was not only the idea about an afterlife but the way it was shown. Great scape, great colors, a place made by yourself and for yourself.

And then I saw the house.  That was the moment when I started to imagine.  How will this look under water?  It should be a place with a house as a focal point, but well supported by a variety of mainly green and red plants.

I made the house from granite because granite was easy to shape into the form of the house. Originally the granite pieces were to be polished, but after a few discussions with people that followed the project step by step, we decided to keep it unpolished. Polished granite reflects light and the idea was too only suggest that there is a house and not to bring it into the forefront. Plants were the most important, I added a few roots on it for supporting the mood and also to give it a little bit of an overgrown look.

Substrate was a challenge. Using foam (polystyrene) in excess makes the base unstable, having a strong tendency to float, so I made a few trials.

The solution was two layers of foam, one layer of gravel, and one layer of JBL Manado. The substrate is not too compact but it is coarse. Being coarse, there are many small places that can host beneficial bacteria, that are supportive of the tank inhabitants.

JBL Manado is substantially easier to form, areas with Manado can be arranged in different shapes or depths.  Spead over the layers was Tropica Soil, which is a soil that has nutrients for long term effects for plant health.

I have used a real Bonsai that was neglected by someone and dried. I kept it for one month in water, it didn’t break down so it became the central tree. The other one is made by roots, mainly from grapes.

As you can see in the pictures, I mainly used low growing plants and moss.  Anubias and Bucephalandra were primarily used on the roots and stones, and Alternanthera for a red plant.

Christmas moss, Taxiphyllum, and Fissidens are the types of moss on the trees, and Coral moss was placed on top of the rocks. To cover the substrate, Marsilea Hirsuta, HC, and Eleocharis pusilla mini were planted.