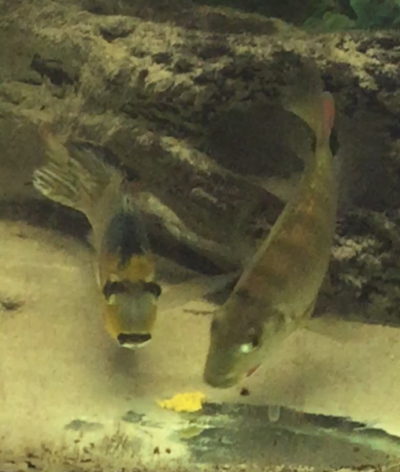 Alan and I are longtime fishkeepers. We met at the Catfish Convention in Virginia. Early on most of my experience with West African Cichlids consisted of Jewel Cichlids and common Kribensis. He had acquired a pair of Pelmatochromis buettikoferi soon after he moved to Pennsylvania from England. They were housed in a 125-gallon aquarium with a school of Congo tetras. There were a couple of Synodontis brichardi catfishes as well.

P. buettikofferi is not like the well known aggressive Tilapia buttikoferi. The pair was the exact opposite in temperament. The coloration of this Pelmatachromis is a subdued creamy brown with black accents and they were excellent substrate spawning parents.

The Pelmatochromis buetikoferi were moved on to make room for a group of wild caught Lamprologus congoensis that we purchased. This was an impulse buy while visiting Shark Aquarium store during its final month of business. They were boring colored fish to start with. In a few months, the males outgrew the females and turned jet black. Hundreds of fry appeared from the caves regularly. One of our males won Best Cichlid in Show and took Reserve in Show at the Keystone Clash convention. In a six foot long aquarium, they were easy to keep, requiring no special care.

We purchased two Tylochromis lateralis via Batfish Aquatics. They were only an inch long. This was the first time we had seen them offered for sale in the United States. After a year it appeared that they were both females. Luckily, a year later, we were able to order eight more from Oliver Lucanus at Below Water via New England Cichlid Association.

They seem to not ship very well. Four of the twelve died in transit. Our group of 10 currently reside in a 180-gallon tank. There are 3 males and 7 females. The males are very different in appearance. The larger one is colored like pictures I have seen of Tylochromis sp. kinsuka. Although I’ve also seen similar pictures on Aquarium Glaser’s website having that color form listed as Tylochromis sp. lateralis. The other two males are a little smaller than the previous freckled faced “kinsuka”. They are stunningly colored when desiring to breed with a female. They have a gold head with a vertical black bar across the shoulder and a thick blue-black and red margins in the dorsal fin. The coloring is muted when not spawning.

We inquired of our friend Dr. Paul Loiselle what he thought of the two different color forms that are displayed in our group. He asked that I email pictures to him to share with Dr. Melanie Stiassny. The timing was fortunate, she responded that she had been investigating the same anomaly. Apparently, it has been observed in the wild that both color forms school together. Her graduate student had completed morphological and genetic studies on the two male color forms and discovered that they are the same species, Tylochromis lateralis. This is an example of male polymorphism.

They are a sand sifter like Geophagus from South America. When people visit our fish room they usually mistake them for Geophagines. They have spawned at least 4 times but the eggs haven’t been fertile. We aren’t sure if they need a little more time to mature since they are a little younger than 3 years of age, or if our water is too hard for the eggs to be fertilized.

Another Cichlid we are excited to have breeding in our fish room is Teleogramma brichardi. We bought 10 from a fellow member of NECA. They arrived home with 8, and eventually, they whittled themselves down to a pair despite being in a 125 gallon. They are really comical to watch. We are currently keeping the pair in a 75-gallon aquarium with some turquoise rainbowfish as dithers. We use a large hang on back tank filter and a powerhead to increase circulation in the tank. The female loves to spawn in a flattened cave that is big enough for the pair to turn around in. We often find the male hanging out in a floating log or hanging out in a cave next to the female’s cave.

Backtracking to the Jewel Cichlids, I had an unusual spawning occur. The pair spawned regularly in a 125-gallon tank shared with convicts, but no fry ever resulted. I brought home a male Hemichromis moanda as a mercy bid from a club auction. It is a red jewel cichlid but has yellow in the lower half of the fish. Within a month she spawned with the new male. The old male was not chased off. The reverse trio worked together to defend the fry. I don’t encourage making hybrids, but it was unusually interesting behavior I witnessed.