The Vampire Crabs of Indonesia 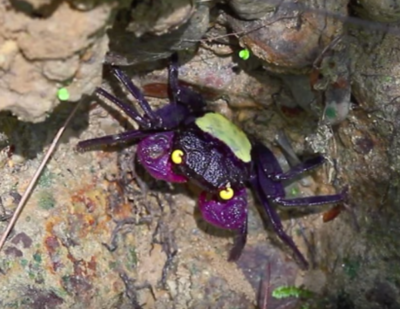 Today we travel to Cilicap, Indonesia in Central Java. We have left civilization far behind. This is a dense rainforest area and guides are your best bet for finding our quarry.

We trudge through the dense undergrowth, looking for a lower spot in the forest that might hold water from the torrential rains. Creatures are lost and found in this forest quite often. We find a small stream, barely more than a small ditch. A collection of sticks, rocks, leaves, and detritus are piled in the shallows.

We have found our quarry, its yellow eyes staring from the darkened recess. We have found the Vampire Crab, Geosesarma dennerle. Named for the company that sponsored the expeditions to research this area. I rarely get a chance to share this journey to find them with you, but Chris has just that video. For you, I share his journey.

These are entirely freshwater crabs that are both aquatic and terrestrial. They are small, reaching 1-2″. Younger crabs are highly aquatic, with older crabs being more terrestrial. They are chiefly carnivorous, eating various insects primarily. They are not known to have an appetite for plants.  Use in Vivariums and Paludariums is achievable.

They are generally active during the morning and afternoons, hiding during the brightest part of the day. They can eat fish, though it’s usually only scavenged.

Breeding is certainly achievable in captivity. Females release young crablets, having no zoea state as its developed further in the eggs. Young crabs can be eaten by adults, but proper feeding should yield good results. Various dry Crab/Crustacean foods are a terrific option. They become bolder as they get used to your feeding and have their bolt holes accessible.

Overall a delightful species that can really become an endearing pet. Best used in a focused tank, though in a large enough system a nicely done Java biotope could be wonderful.