The Mer Bleue Conservation area is a sphagnum bog near Ottawa Ontario, Canada with acidic water. Black spruce, tamarack, bog rosemary, blueberry, and cottongrass make up the majority of plants in this highly unique environment.

Beavers, birds, snakes, and frogs are abundant as well. The rare Spotted turtle also makes its home among the stunted growth evergreens.  Canada geese frequent the grassy area on its margins and you can hear them flying in and out regularly.

Sphagnum moss grows in this boreal-like environment, called taiga in Europe, and creates dark tannin stained water. The pH is acidic and the sphagnum moss surrounds the black spruce forest and the open heath vegetation. It is quite different than most habitat I have seen. Living in the Pacific Northwest there are areas with a lot of moss but this IS moss. 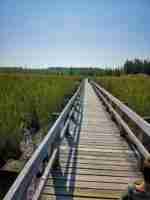 Sphagnum moss grows and grows. The miniature black spruce and the boardwalk gives a feeling that the walkway is among the tops of the trees and moss grew up to mee the canopy. It didn’t, but it is easy to imagine that it did.  There are about 8 feet of sphagnum moss in places.  Deep enough to get lost in.

In fact, there have been many bodies found in sphagnum bogs that are well preserved.  Some even preserving the facial expressions.  Some believe that sacrifices were placed in bogs around the world or buried because they were thought to be a sacred place.  The acidic conditions preserve clothing and tissue, as the sphagnum acts as an antibacterial.  Sphagnum moss not only makes great substrates for growing some plants but it also has healing properties and was used in WWI to treat wounds. 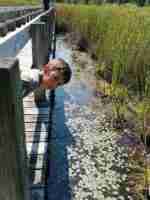 Walking along the wooden path circle takes only a few minutes to do if you park close to the trailhead.  There is a series of trails in the area.  We parked in the P21 parking area and walked through the forest to get to the bog.  Along the way, we saw several Eastern ribbon snakes scurry away as we approached them on the trail.  These snakes can glide easily across the water seemingly as easy as they do on land.

If you get a chance to check out the Mer Bleue Conservation area do it!  It is one of those places that isn’t like any other place you will likely see.