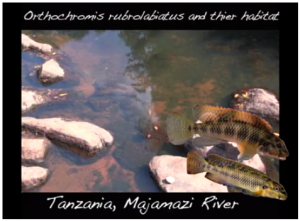 It looks there is some interest about these cichlids, thanks! I caught this species first in 2010 in one of the most remote areas of Tanzania, and were very much unknown at that time.

Orthochromis rubrolabiatus is a maternal mouth-breeding riverine goby cichlid and is endemic to the Majamazi river. The Majamazi originates on the eastern slopes of the Makoma mountains  and drains into the river Ugalla (Malagarasi system).  This genus has undergone a species radiation on the east side of the Lake Tanganyika ecosystem, where it is represented by at least six described species (Vos and Seegers 1998).

The drawing from his forehead is called “mask” in the Orthochromis genus and have many different types, and its typical of its kind. Remarkable is that the male shows red-purple spots on the top of his mouth. This sexual dichromatism is only found in this species.

The male clears a spot of sand from some stones where after the female lays her eggs.  The female then takes the eggs directly into her mouth after the male has fertilizes them. About 18 days later the young fish are swimming free. 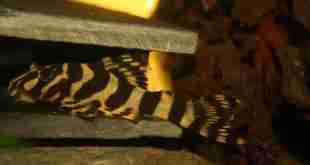