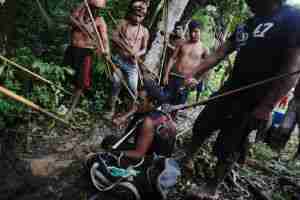 Around the world illegal and unregulated logging threatens the jungles and forests.  Unfortunately unmitigated logging destroys that which will never return to its former existence.  Often it is overlooked by government agencies, however this time it looks like the indigenous people took matters into their own hands and doled out a good ol fashioned beating to these unfortunate souls that happened to pick the wrong place to cut.

Photojournalist Lunae Parracho followed along and photographed the events as they unfolded.  The angry, and rightly so, indigenous people attacked the loggers, tied them up, and beat them.  They also destroyed some of the logs and set their truck on fire.  Hopefully it sets a precedent and example for the future.  Its unknown whether the logging company will return with armed guards but it is hopeful that they will venture out to harvest land that has been managed for timber.

Logging around the world has decimated many endemic species and brought about the extinction of a multitude of flora and fauna.  Some of which has never even been documented scientifically.  Unfortunately this is the way that we are headed globally, as this same destruction occurs not only in South America but also most every other continent that has virgin timber with an economic value.

The value of land and forest is yet to be recognized by most and the natural resources are largely overlooked except for timber.  Eco tourism and many other facets of natural environments have yet to be appreciated for their monetary income.  Until we can recognize that a there is more inherent value to a piece of land than a dead tree laying on the ground we will see more and more valuable resources laid to waste under the tracks of a bulldozer or the tires of a logging truck.

It is estimated that loggers and miners have killed 450 indigenous people between 2003 and 2010.  One being a young girl of 8 years old they tied to a tree and burned alive as a message to scare off tribes from protected lands.