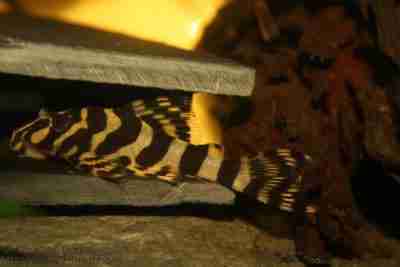 We are journeying to Brazil, to the Rio Tapajos and Rio Jamanxim. Among the whitewater regions scattered in the rocks, we find our elusive target. The most popular of the Peckoltia genus, the Imperial Tiger or Leopard Frog pleco (Peckoltia compta L-134).

They are quite popular for many reasons, namely color, they look amazing. It’s probably one of the most popular of the L named plecos kept in the hobby with its striking pattern and coloration.

Its small adult size of 4.3″ also means its at home in many smaller tanks and it is one we see bred quite often. Its diet is manageable, but this is often one of folks first forays into plecos that do not eat algae.

These are generally carnivorous, so they appreciate more meaty fare. Bloodworms and carnivore pellets are taken with gusto. They are tolerant of most waters, though they don’t mind both harder and softer waters.

Sexing them as adults is fairly easy, with males developing long ‘hairs’ (odontes) along the rear of their body and females being a bit larger and lacking the longer ‘hairs’ of the males. Breeding is typical of most plecos as they need a cave in which to spawn, and the male guarding it once the eggs are laid.

There are 2 collection points, the Tapajos is the one most often seen, the Jamanxim ones exhibit far more spotting instead of striping and can be sought after due to their rarity. They are a great tankmate to most residents of the Tapajos region, tetras, driftwood catfish, Geophagus, etc. They usually demand a little territory in the aquarium but housing a group is possible with enough real estate.

Should you desire a breeding group, I recommend securing 6 and watching for a dominant pair to form. Slate pleco houses work quite well. Often you may get 2 pairs from such a grow out. Extras can be sold, as they are always in demand. I know at least 3-4 breeders,in the Houston area, so these are definitely achievable. Definitely an amazing looking fish that will quickly become a favorite.