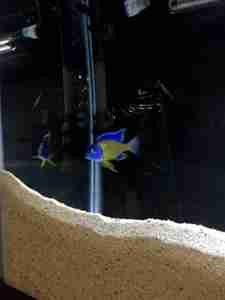 Article and photos by Nate Schmuecker

Many hobbyists claim that there is no way Deep Sand Beds work for reducing nitrates in fresh water. This Aulonocara Stuartgranti Blue Neon males’ tank is 17 weeks without a water change. I’m now going into my 3rd spawn cycle. He has two fresh females holding already. I love proving people wrong.  I’m using Aragonite by CarribSea. I have about 80 pounds of this and it goes from a depth of four inches all the way to 6″ plus on the other side.

Aragonite sand is what is also used in Salt Water tanks, it’s also good for African Cichlids because it buffers the water and puts back certain minerals they thrive on. I also use Xport Bio and Xport NO3 in my canister filter which is running only 25% of the normal flow, not only for the UV sterilizer but for the Xport NO3 to work properly.  Many medias don’t have enough pores that allow for bacteria to really proliferate deep inside the media. That’s where Xport Bio and Xport NO3 from Brightwell Aquatics differs in a big way.

Deep Sand Beds, also known as DSB’s are tricky because it’s like playing Russian roulette because the process of the anaerobic bacteria (doesn’t need oxygen) breaking down the nitrate into nitrogen gas which leaves a bi-product deadly to the fish down in the anaerobic or “cryptic zone” deep below the sand bed.

This process of denitrification is more of an advanced level method of denitrification. There are several biological medias at play, as well as a strict feeding routine. It’s best to research the fish you’re intending to keep in a tank with a deep sand bed as to whether the fish will disrupt the process or not.  I put many hours of research into the idea before actually employing this method in my tank. It’s about patience. Anaerobic bacteria doesn’t colonize overnight, the less you do the more it’s able to colonize.

When I do a water change in their tank, I will be very careful when I syphon the sand. I slowly put the tube down to the bottom of the tank and kink the hose so the sand tumbles slowly.  I kink the hose again and pull up and move to the sand towards the back.

The male A. stuartgranti Blue Neon will then make a new pit and stir up the bed allowing the nitrogen gas to be released without the bi-product gas lingering deep below. This method would be hard to do in a mixed African Cichlid tank because males will constantly dig to mark their territory. This disruption in the sand allows oxygen to get down deep in the sand killing off the anaerobic bacteria.

With this male, he has dug his pit, has his spot and their are no other males to compete with. DSB works very well with this particular species because when they aren’t in breeding dress or spawning they are open water swimmers that will school up and forage for plankton.

Both of my breeding groups are bred from Wild Caught, even though they’re captive they still have wild instincts, you have to cater to the needs of the fish and provide the right environment to allow maximum longevity so they will thrive and breed. People forget that even though an F1 is captive, being captive won’t change their instincts unless you force them to. That’s why I see so many people fail at keeping cichlids. They’re an advanced level fish, they aren’t for people who haven’t kept fish before.