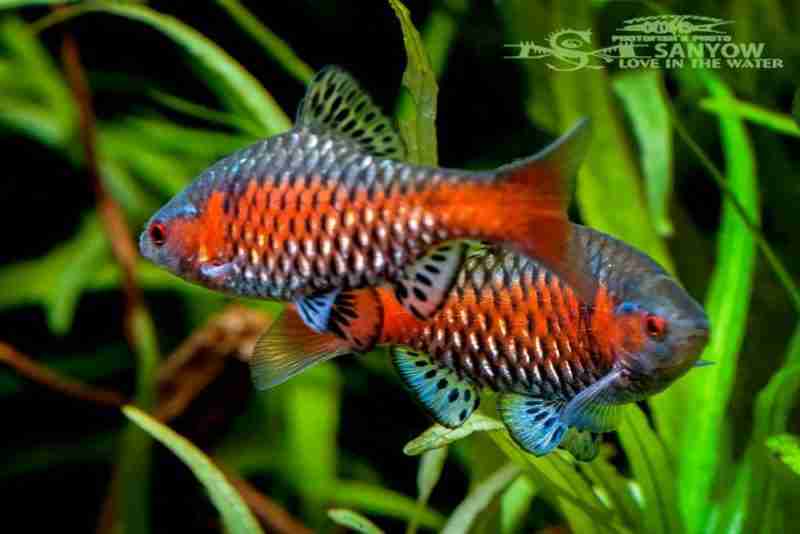 The Odessa Barb, Pethis padamya, can rival the colors of many saltwater species. Odessa Barbs are considered hardy and will tolerate a wide range of water parameters but will thrive in well-planted tanks that are slightly on the acidic side of the pH range.

The male Odessa Barbs are usually the more colorful ones while the females become plumper when developing eggs. Females are larger but the males develop more coloration as they mature.

Aquarium Size: At least 10 gallons for one – you’ll need a larger tank when keeping multiples.
Odessa Barb Tank Mates: Slow swimming fish and fish with larger fins may make an attractive nipping target for this Barb.

Tank Region: This is a relatively fast-swimming fish that will roam all over, but mostly stays in the middle region of the tank.

Temperament: The Odessa Barb can be aggressive with other Odessa barbs. You might see some territorial aggression or tests of dominance among the males. They may also nip at slower moving fish with larger fins.

These little battles shouldn’t last long and they really should not be cause for concern. If it gets out of hand though, be prepared to separate the weaker fish. The Odessa Barb should play nicely with the other fish in the tank but watch for fin nipping. Fin nipping may be diminished if you keep a school of Odessa Barbs.

Caring For the Odessa Barb

Feeding:  Odessa Barbs are omnivores and will accept flake, freeze-dried and as with most other fish giving them some live or frozen fish food occasionally will reward you with greater coloration and lots of activity. Vary their diet but try to give your Odessa Barb a good quality flake food as the main source of their nutrition.

Breeding: An egg scatterer, it can be difficult, if not impossible, to breed in a community aquarium. A bare bottom breeding tank will increase your chance of success as well as a slightly lower pH. Remove the adults after they have dropped and fertilized the eggs.

It should take 3 to 5 days for the eggs to hatch. Be ready to feed them infusoria for the first few weeks and then baby brine shrimp. Frequent partial water changes (daily) are required during the grow-out stages as well.