The Search for Ameeraga Frogs with Josh Richards

Biotope1 January 20, 2015 Biotopes, Uncategorized Comments Off on The Search for Ameeraga Frogs with Josh Richards 2,279 Views 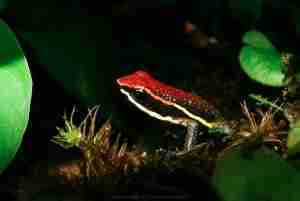 We did not expect to find a thriving population of Ameerega macero in such a tiny plot of forest completely surrounded by destroyed habitat….

Henry, my wife, and I took a trip to the jungle of central Peru in search of… frogs. Of course, we were open to any other animals we could find as well. We went to a well known little town in the central jungle called Satipo.

We were absolutely amazed to find that there is ABSOLUTELY NO FOREST left around Satipo. We were determined to find something however. After talking with some locals, we found ourselves on a 1 hour combi ride and were told we would find forest at our destination…. 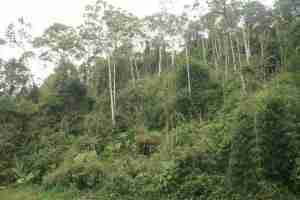 Not surprisingly, we ended up having to take another 1 hour ride via moto taxi into the hills to find a tiny patch of forest that was left amongst all the cleared lands and chakras growing crops. The tiny patch of forest is a well known waterfall and destination for the locals.
We were not surprised to come up empty handed in this spot. We did not give up however and found ourselves on a trail that led through a large clearing. From the trail, we could see the river and forest to the other side.

We continued to trod our way through tall grass and mud to get to the rivers edge to find that there was no way to cross it.

I spotted a second patch of forest up river on our side of the water. Excited with finally finding forest, we made our way into it via a tiny trail. The trail led us beside a very small almost dry creek that only had pools of water left. 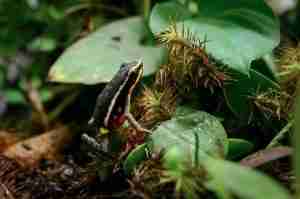 We were less than a minute into this forest and we could hear the calls of several species of frogs, one of which sounded like Ameerega. With excitement, we searched and searched every bit of land amongst the leaf litter and rocky terrain. Within about five minutes, I yelled with excitement.. AMEEREGA!!!

Not just an Ameerega, but an adult with a bunch of tadpoles on its back.

Henry came running as I dove to the ground to try to catch it! But.. too slow!.. It got away! Now we were all very pumped and searching hard to find more. Shortly after the first one, I found a second one…

This one wasn’t going to get away.. I dove through thorny vines to the ground and caught this one! It too had babies all over it´s back. What luck! We searched about an hour more to find several in the area. It seems like this isolated population of A. macero in this very small patch of forest is doing well for now.

I only hope they stay that way… 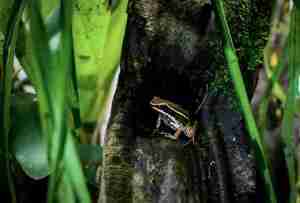 Another time a friend of mine and I took a trip to the Cordillera Azul to look for frogs. We did not find silverstonei, but we did find rubriventris. The trip to the area was quite interesting. The surrounding forest is AMAZING, filled with diversity and life, leaving you hungry for more!

You can spend a lifetime here and not see everything! The local people here assumed that since we are “gringos” that we have a TON of money.. Well, I don’t have a ton of money and my friend is not a gringo. He is 100% Peruvian, born and raised.

It was almost funny as he got so offended at one lady that told him, “Son gringos y lloran por la plata”.. You see, she was trying to rip us off for 20 soles and my friend wasn’t having it!

This was pretty much how it was with all the people where silverstonei is found. They told us that lots of gringos go there to look for frogs and buy frogs.  Hence why they have this mentality… 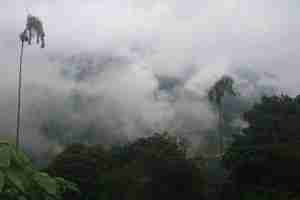 It is also sad to know that so many frogs are being smuggled from there on a regular basis and the locals help it happen.  So, with no luck in the highlands, we made our way to the eastern versant of the Cordillera Azul in the lowlands. There, our luck changed.

We found Ameerega rubriventris in abundance in second growth forest as well as the disturbed areas. They are far more common in disturbed areas than actual forest we found.

After more than our fair share of seeing rubriventris, we made our way down a trail into the mountains that took us into some of the most amazing tropical forest I have ever seen. Completely covered in moss with large adult trees, LARGE breeding plants for various species of frogs, begonias, orchids, EVERYTHING WAS THERE! 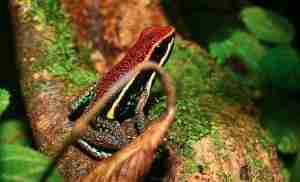 We did not get pictures of this habitat due to the heavy rains that plagued us. We did however, find the SMALLEST FROGS I HAVE EVER SEEN!!! Chiasmocleis antenori, formerly known as Syncope antenori.

The adults are half the size of R. reticulatus and the newly metamorphosed froglets are 3 millimeters in length!  I couldn’t believe it when I saw them! We are planning a trip back to this area. I promise to take more pictures and hopefully we will have luck finding silverstonei.