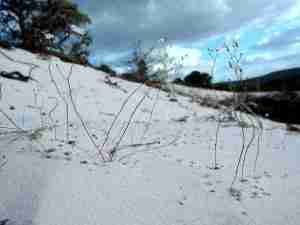 The plant isnt much to look at really.  It is a sparse and spindly looking plant with little adornments over its little white flowers.  It’s mostly what’s underground that is the fascinating part.  Truth is stranger than fiction and this is an example of the adage.

The white sand habitat in the Bahia area of northern Brazil creates an environment where it is hard to survive for a plant.  As such the p. tuberosa has a long root system with tuborous growths presumably for storing away nutrients.  it also has adapted to provide nutrients to itself in a manner that not many other plants have. 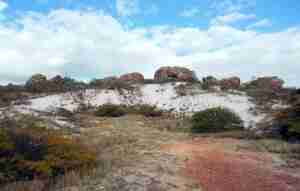 The other plants in philcoxia have sticky glands on their underground leaves.  These trap nematodes underground which they utilize as nutrients much like the other carnivorous plants like venus flytraps and drosera.  It is assumed that p. tuberosa works the same way from initial findings.
The scientific paper written by Carvalho and Queiroz describes in their  papers abstract:

“Philcoxia tuberosa is proposed as a new species of Plantaginaceae from Bahia (Northeastern Brazil). It can be differentiated from the remaining three species of the genus by the presence of tubers in the branches, smaller flowers, pedicel and sepals sparsely glandular, bicolor corolla with purple tube and white limb, and longer sepals and filaments. This new species has a narrow geographical range in Morro do Chapéu municipality, on the Northern slopes of the Chapada Diamantina mountain range. It occurs in white sand dunes within a patch of Seasonally Dry Tropical Forest. “ 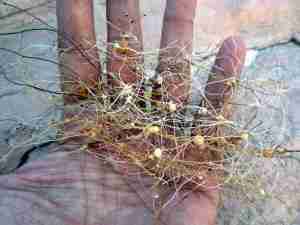 While carnivorous plants are an oddity in and of themselves it seems that the conventional carnivorous plant has more diversity than one might imagine.  Utricularia which is somewhat similar has a terrestrial and a waterborne carnivorous plant but the underground leaves catching and digesting nematodes brings the saga to a new level.

“I’m not sure it was clear from the P.tuberosa publication, but it is only known from a single sand dune! Scary huh?  In fact, all the other 3 known Philcoxia species (and one other still unpublished) are also only known from 1 or 2 locations, they are amazingly rare!  And to think the whole genus was only described in the year 2000 is crazy! So much biodiversity still out there to be discovered and studied properly.” 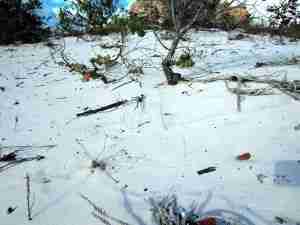 Fernando Riadavia is a plant enthusiast who has been exploring Brazil on his own looking for plants to observe.

“I just do it because I love it! I’ve been doing this for 25 years and really enjoy studying plants in the wild, finding rare or new species, and helping to understand the flora of Brazil.” Ridavia explains.

“Plus I get to travel to all sorts of cool & remote locations. I am a biologist, but I work in Biotech and am not tied to any university. So plants are just a hobby , passion, obsession for me.”
Special thanks to Fernando Riadavia for the photographs and interview.