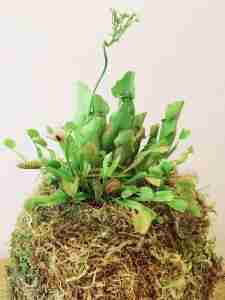 While it isnt quite kokedama or shitakusa it IS a giant mossball.  After seeing the giant floating project by Oliver Knott I decided to use some material laying around and build something.  I did have to go out and get the styrofoam ball.  It could have been made without the styro ball but I wanted it to hold an ample supply of water so I didnt have to tend to it so often.  The lower half of the styro ball holds water and the slip in container has drainage holes so it doesnt dry out so fast.  It is effectively a bottom watering display.

I think it needs a piece of driftwood or small branch or something else.  When the sarracenia ‘yellow jacket’ gets large enough though it should help balance it out.

The styrofoam ball is covered in moss and has a cutout that accepts a deli tub.  The deli tub is filled with potting mix at a 1 to 1 peat and sand mix for the VFT and sarracenia.  The styrofoam ball is glued together and it will hold water itself but it is more interchangeable and serviceable if I can take out the deli tub.  I could have easily made the deli tub drain and sit in a bottom watering manner.
I wrapped the ball on the outside in a layer of thick felt to wick water from the bottom up and keep the moss form drying out so fast.  I suspect that Ill still have to spray the moss to keep it alive.  Instead of wetting the moss I decided to sit the ball into a tray of water.  Overnight the moss was wet for several inches up and poking my finger under the moss the felt was wet another inch or two higher.  Once the whole thing is wet I imagine it will wick water better and remain more moist. 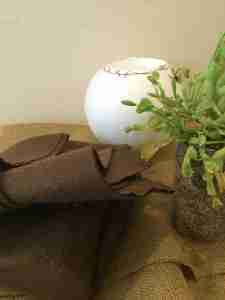 This was a pretty quick project and while Im not 100 percent happy with it,  it works and it was easy.  It is esier and less messy than traditional kokedama balls with wet substrate being wrapped in thread and covered in moss.  I would do another one of these styrofoam balls in the future.  Perhaps Ill try to design it a little better and make a bigger effort on the plants and accoutrements that go with it.