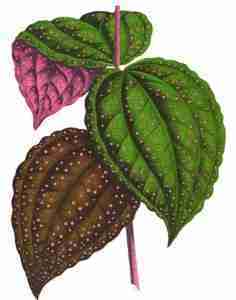 Germinating seeds of bertolonia is not that difficult. One of the best ways is to mix a potting mix of half African violet soil and one half perlite. On top of this add a thin layer of African violet potting soil a few millimeters thick.

Use a tall 32 ounce deli tub with fitting lid and about 3 inches of potting mix in the bottom. After adding the 3 mm layer of your potting soil moisten the soil but do not leave water standing.

Add the seeds and be sure to spread them around gently on the top layer of African violet potting mix. Now spray them gently with water and close the lid of the deli tub.

Place the deli tub under bright fluorescent lighting. Shop lighting would be more than sufficient as would most aquariums with their respective lighting hoods or fixtures. 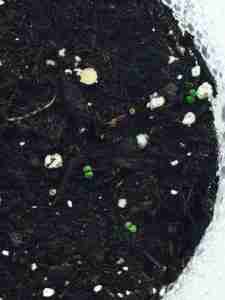 Germination of your seed should occur within a couple of weeks but occasionally can take several months depending on the species. After the seedlings reach about a half an inch or so tall you can start opening the deli lid and letting the moisture level acclimate to a less humid level.

The seedlings were started about 10 days ago. These small seedlings are peeking through the top layer and are growing steadily but slowly.  These are Bertolonia sp. Sooretama from Brazil started from tiny seeds.

I was going to try to tissue culture them but the seeds are so small and I was short on time so I did not. When the plant gets big enough I will try to culture them then.   The seeds would probably have been the easiest way to get them initiated into culture.

If you’re interested in how to initiate small seeds like Bertelonia there is instruction in my book Plant Tissue Culture: A Home-Based Guide (How to Practice Plant Tissue Culture on a Budget) Order it from Amazon either printed or ebook for the Kindle.