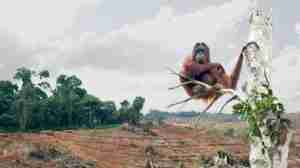 Sweat beading on his brow, a heavy framed man in a too tight t-shirt – the design become darkened by slowly spreading perspiration – huffs and puffs his way through a Food Court at a dying mall in Middle America. In a paper bowl, that when read from the bottom, would proclaim “Made from 99% post-consumer waste!”, is a slowly melting puddle of “Manilla Vanilla” ice cream.

He digs his spoon into the glob of artificial flavorings, colorings and texturizers and kills the Orang Utan.

The large man sits down his bowl, thinking maybe he should have ordered two servings, maybe the “Screamin’ Strawberry”? The bulldozer runs over the burning, flailing body of the Orang Utan. The man slides his spoon around the bottom of the bowl, scooping up every last bit of the melted ice cream. The bulldozer spits black smoke into the sky as it is put in reverse to once against crush the now dead Orang Utan.

The man returns to the ice cream shop to purchase another bowl, not knowing that with every scoop, he is destroying forests, the habitat of the Orang Utan and many different species in Borneo and Southeast Asia. Each spoonful contains slave and child labor.  Each spoonful of his cheap, artificial ice cream means the death, death to flora and fauna, much of which has never been documented by biologists. He is a destroyer of worlds, a murderer of innocents, and he is doing it one spoonful at a time.

The oil palm industry is booming throughout Southeast Asia as a result of an increased demand for biodiesel and cheap food manufacturing.  The Western culture of fast and cheap, albeit unhealthy, pre packaged boxed foods curse and follow the man around from his day to day life.  Leaving behind a string of dead burnt vegetation and animal carcasses. 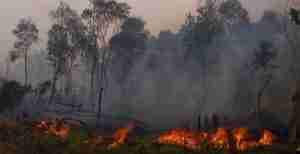 The Mall and its Food Court closes so the man makes his way out after getting his gluttonous fill of ice cream.  His motorized electric scooter takes him to his next stop, the grocery store, where he fills his basket with more death and destruction.  This unhealthy food isn’t just killing the man by clogging his arteries with plaque.  Its killing the rainforest and its inhabitants across the Eastern world.

Palm oil was supposed to be a healthy alternative to the bad fats that Americans had been eating for generations.  One study made a movement away from natural fats into plant based fats and that misguided but engineered discovery has killed many people since its falsehoods became widely known as truths.  People who ate palm oil rich foods for five weeks saw their LDL cholesterol (that is the bad cholesterol) skyrocket.  Yet palm oil has found its way into 1 in 5 foods on average.  These foods along with a high carbohydrate diet are causing heart disease at a never before seen pace.

The Sumatran tigers don’t think its healthy either, which are set to be extinct in an estimated three years from deforestation.  Fortunately the man in the too tight t-shirt doesn’t use a lot of toothpaste and health and beauty products which also contain palm oils.  The Sumatran tiger, like the Orang Utan, want to live free and roam the jungles because they do not need toothpaste and baked goods that contain palm oil.  They are killed en mass simply for living where man wants to grow more oil palm trees so he can watch television and eat uniform potato chips that come in a tennis ball tube.

When you buy a muffin, are you killing a Sumatran Tiger.? If you close your eyes and take a bite, and imagine hard enough, can you smell the burning hair?

Cheap, readily available food is not only killing you one bite at a time but its killing the Orang Utan, the Sumatran Tiger, and scores of undescribed, never before named, plant species unknown to the scientific world.  We could be razing over the cure for cancer and we never even saw it coming as it was slashed to extinction by chainsaws and logging trucks, burnt, razed, and planted with oil palms.  One spoonful at a time.