Treating Ich With Medication and No Heat Will Lower Stress

Biotope1 August 21, 2015 Aquariums, Fish, Freshwater Comments Off on Treating Ich With Medication and No Heat Will Lower Stress 12,298 Views 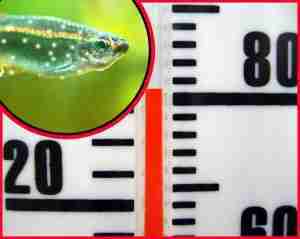 Ichthyophthirius multifiliis is an aquarium malady that many hobbyists experience at some point in the aquarium hobby.  The parasite shows as a number of small white dots on the body of the fish that resemble grains of salt.  Ich, also called white spot, reproduces quickly and spreads readily.  If not treated, it has almost a 100% mortality rate.

Heat, as a cure, is not an ideal form or method of treatment and it can be easily explained why. It’s fairly simple. If you take a look at the biology of the Ich parasite and the biology of fish, how they react to it, and the issues it brings then you will see heat isn’t the best overall treatment.

So first lets try to understand Ich and how it kills.  Ich kills by basically suffocating the fish. It does this by first attacking and covering the gill tissues with the ich parasites. Doing so covers valuable resource area for the fish to take in oxygen.. This causes the first reduction in oxygen to the fish’s body and the beginning of stress

The parasites are feeding on the gill tissues and the fluids in the fish’s body. Due to this it is pulling valuable and much needed fluids and blood that carry oxygen to the rest of the fish’s body. Valuable resources are now being sucked away from the fish. Now there is a double impact on the fish from reduced gill area for oxygen intake and now the intake that the fish is getting is being sucked away by the parasite.

Soon the parasites reproduce and are all over the body using this fluid and creating tissue damage. This causes heavy amounts of osmotic loss and dysfunction. The fish has a biological response to protect itself from such biological attacks and it uses this response. It thickens the outer membrane of the gill tissue to try and shed the ich parasite. Unfortunately the ich have dug in too hard. Now we have a new impact on the fishes intake of oxygen. By thickening the membrane of the gill tissue it will reduce oxygen levels even further. Eventually this gill membrane will swell and rupture and separate from the over layer causing massive amounts of oxygen loss. This loss of fluids at a higher rate will cause the fish to now also suffer even heavier from osmotic failure and can start to suffocate which can be seen as labored breathing.

An old remedy for ich it to raise the temperature of the tanks water to kill the ich and to keep it from reproducing.  Oxygen levels decrease as water temperature rises creating more stress on the fish.  There are lots of factors that affect the amount of dissolved oxygen levels in water such as volume and velocity of water flowing in the water.

At 80 degrees water holds roughly about 10ppm at given conditions. With an increase in temperature up to 86 F the dissolved oxygen levels will fall down to around 6 ppm of dissolved oxygen. This is why increasing water temperatures may not be the best answer.

Available oxygen is also limited to the type and number of organisms in the water and all organisms use oxygen for the most part including many bacteria. Altitude or atmospheric pressures are different all over the world and these have great effects on how much oxygen can actually even break into the water and be absorbed. Higher altitudes have lower oxygen levels and the levels of oxygen at sea level will be saturated the most. 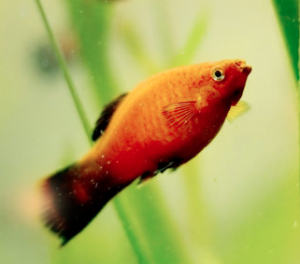 Minerals and various different solids can have an effect on the dissolved oxygen. The amount of nutrients in the water can also make a difference. Organic wastes and dissolved organics will reduce the amounts of oxygen levels in your water.  Water can only absorb so much before it cannot absorb more.

Higher water nitrate contents, ammonia, and nitrites can also contribute to lower oxygen levels.. Even things such as algae blooms. All these things will affect how much dissolved O2 levels are in the water. Combine this with the issues explained above about how fish fight off ich and one can see that oxygen is harder to come by in many ways.

With an increase in temperatures the ich parasite’s metabolism speeds up. It makes it reproduce more and more and it also makes its life cycle accelerate. This can create a gap in their life cycle but this can also have a double impact on the fish due to more parasites being born. There are and have been identified strains of ich resistant to salt and resistant to heat at temps even as high as 92 degrees.

The Ich may not kill the fish in many cases. However secondary infections of various bacteria that thrive in high water conditions and fish with heavily weakened immune systems don’t make a good combination. This is exactly why it’s not recommended to raise the temperature. Its in the science and not just a repetitive thing thats been tossed around. Using a proper treatment for this parasite is most beneficial and most will not destroy your beneficial filter if used correctly.

Quinine sulfate and chloroquine both affect ich in all of its life stages. Products that contain zinc free Malachite green and formalin base work very well and are easy on sensitive fish if dosed at a half dose rate. At the same time you can use a treatment of triple sulfa. It acts as a buffer for many fish for the compounds in the other treatments listed and it also helps protect them from any secondary infections.

There are also products that work for planted tanks, shrimp and other invertebrates, as well as scaleless fish like loaches.  Kordon Ich Attack is made from natural ingredients and works.  It also won’t stain your aquarium silicone like the malachite green can.

Chloroquine Phosphate is a medication that is friendly in most environments and kills ich in all stages. It is also less intrusive to the fishes system. The current treatment of formalin green and other esters also do great jobs at fighting the disease. The use of them correctly is just as important.  Most of these are not acceptable to use for shrimp and scaleless fish.

Another thing being missed is the ounce of prevention.  Quarantine your new fish and for a long enough period of time and these issues are reduced yet.  When buying or introducing new fish look for signs of illness before adding them to your collection.  Fish and tank mates with clamped fins, fungus, ich, lethargic fish, heavily labored breathing, and those swimming oddly are all signs that fish have some ailment.  Avoiding these fish is a first step in a healthy aquarium.

These are recommendations that are based on experience and explained how they were arrived at.  The medications listed above are safe and stress fish less, some can be used effectively in half doses even and work for sensitive fish species. Can heat and or salt work? Yes, it can work and has worked in the past.  However realize and appreciate all of the risks and potential issues with using heat. Much has changed and advanced over the years in medicine and disease treatment.  Less stress leads to healthier fish and a faster recovery with fewer losses. 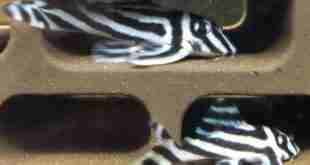 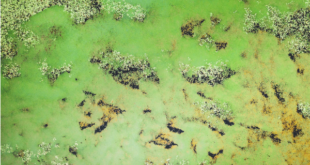 Combating Green Algae to Get Rid of Pea Soup

Green water algae can be a big problem for the aesthetics of your aquarium. No …