Everyone knows about Betta splendens but what about the wild types?

Most people usually have seen the Bettas in different forms in pet stores. They see them and are in mind that these breeds are in this form only.  The part they are not familiar with is that it takes so much to prepare the wild breed into this form. This is the reason people get shocked when they see the wild look of these breeds as they are totally different looking from Betta splendens.

What is threatening these wild types?

We always give priority to choosing a location for ourself before catching Bettas as we have to select the best places where potentially Bettas are available. Bettas are not available just anywhere and they only take formation where there is a plentiful amount of water or maybe a rice field paradise.

Marshy wetlands and shallow streams are the prominent places where Bettas can be found as these areas do not dry up.  I see the best areas myself as those that good vegetation grows such as the right type of ferns.  If I see many of these green ferns along the right type of water areas I know fish will go and spawn under their foliage or near them.

The best season in which you can find plenty of Bettas is from May to July here as this is the rainy season This rainy period provides a proper amount of fresh water which is good for their breeding and conditioning. This makes your work easier finding them. as you just have to throw a net under their bubble nests and you can pull them out from there.

Once you find a good area and find a bubble nest you just have to use a net under their bubble nests and you can pull them out from there. Scooping the net carefully under the foliage near the bank works if you take the time to hunt them. Most people prefer to get males from underneath the foliage by finding bubble nests as it is a sure sign of them residing under there.  This is also the best way to collect natural breeding pairs.

Breeding, Raising and Spreading Wild Types in the Hobby

I prefer wild pairs and I like to breed natural wilds. I prefer collecting wild breeding pairs every time for my project breedings to take place. The most important thing that I note is the conditioning of the males and females.  Using the wild pairs already formed helps make the wild population more natural as they paired themselves and pairs are not made artificially.

I create a natural atmosphere for them to settle down in the tank by putting ferns in the tank. To begin breeding I put females in first and when they settle down and lay eggs I add males to the tank.  Using fresh rain water for the breeding session I change the water and repurpose the old tank water.  Using the old tank water is good so that paramecium can grow easily.  Also, I like to use a bundle of hay so that paramecium can reproduce and for me almond leaves also comes handy as I use them also.

Using the old tank water is good so that paramecium can grow easily.  Also, I like to use a bundle of hay in the water so that paramecium can reproduce.  I don’t use any microworms or baby brine shrimp to feed the fry.  Domestic Bettas’ fry will eat water fleas that are collected naturally from nearby rivers but I prefer my method of growing my own food for the Betta fry. 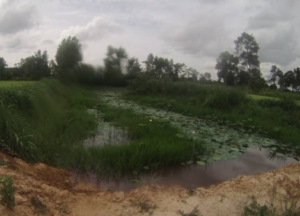 I think reducing habitat loss and preserving more areas will not likely happen as people care more of their farmlands. We cannot blame them as this is their livelihood.  Local farmers earn their money for themselves as they grow food crops like rice and potatoes. So, the only thing we can do is introduce the breeding program bettas to a new location so that these Bettas can repopulate areas they used to live in. Provided the proper changes in the habitat have been made or new areas are found they will live naturally like they were meant to.

The Idea of Collecting and Breeding Wild Bettas

I also breed these wild Bettas so that I can sell one of the best-looking fish in the market to help their survival and to add to my livelihood.  It raises awareness of the wild type.  I also used to sell wild pairs to cover my other expenses like electricity, food, and water for raising them. Mostly I prefer to sell the fish of first or second generation but only those which are the best looking ones. All the others I release back to help support their population and give them a boost.