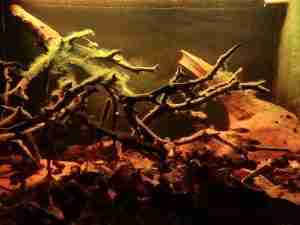 Near the river banks of a small tributary of the Kuribrong river (Guyana)
Dimensions: 70*50*35 (l*d*h)

Water Change: Automatic with 2 episodes of adding fresh water each day by a dripping system. Water temperature is controlled by a aquarium heater of 200 W.

Water Temperature: These streams are relatively cool (24-26°C) and fairly constant. This is due to the stable air temperature and the shade of the overhanging forest canopy. 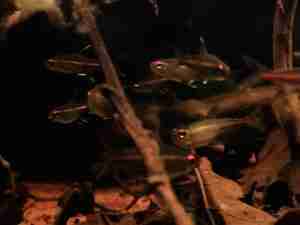 Biotope description: This aquarium simulates a place near the riverbank of a small tributary of the Kuribrong river in Guyana, upstream Amalia Falls. It is a relatively slow flowing, small, shaded stream that flows through the forest.

Kuribrong river is a tributary to Potaro river, which in turn is a tributary of Essequibo river (the largest river in Guyana). This system is a real blackwater environment with low pH and very low hardness. Leaves and branches dominate this scenery.

There is a low fish biomass in these rivers, because of the relatively small catchment area (that give rise to irregular flood pulses) and the rapids and Amaila falls that forms natural barriers. Still, a lot of interesting species can be found, such as Moenkhausia browni, Nannacara bimaculata, Apistogramma ortmanni, Corydoras griseus, Anostomus anostomus and many others can be found in this area. 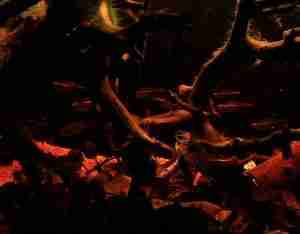 Aquatic vegetation is scarce. One can find Nymphaea odorata and Nymphaea rudgeana there and Rhondonanthus capillaceus and a member of Podostemaceae in the shallow sandstone bedrock rapids.

Sadly enough, Kuribrong river and Amaila falls are a textbook of very bad environmental planning. There were plans to build a massive hydroelectric power project. Local Patamona people were not involved in this project and were very concerned that construction will lead to huge environmental and social problems. Road to this project area is already completed, with a “little“ help of corruption. Besides from that, it was the most expensive project ever in Guyana.

Last but not least Amaila falls run dry a few years ago, because of a severe dry period. Local Minister of Public works stated that a dam could solve this problem, but experiences from neighbouring countries give rise to concern. Ultimately the Amaila Falls Hydroelectric Project was cancelled because of the growing costs. Of course some bad people saw opportunities in that. So the road that was built to service the proposed dam is now left open to gold miners, timber harvesters and hunters. Especially the gold mining process is devastating for the aquatic environment, because of the enormous amounts of cyanide and heavy metals that pollute the environment.