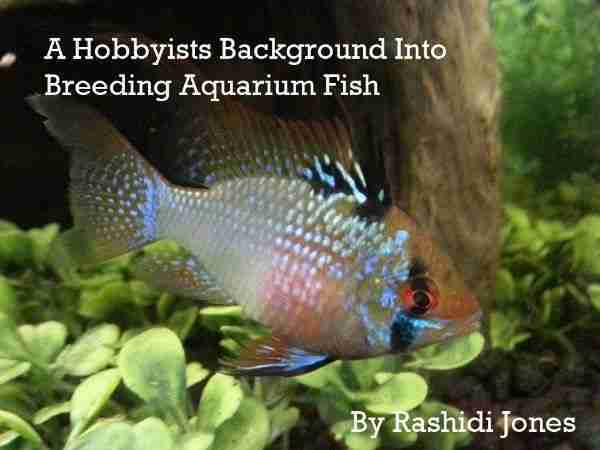 It started when I was 12. I have always been an animal nut, but it wasn’t until my mother took me to a local aquarium shop that my mind and heart were set on raising tropical fish. I was hooked. I desperately wanted one of the big, giant cichlids that I had seen in one of the shop owner’s giant display tanks. It was probably a 1000 gallon tank, and he had all sorts of big cichlids and catfish in it.

To make matters more intense—remember I was a young boy of 12–the store owner dropped a net full of feeder goldfish into that same big tank. It was full of hungry carnivorous fish! They went wild! Right then, at that very moment, I knew I had to have one!

So my mother and father bought me a pair of guppies and a ten gallon aquarium for my birthday. They were starter guppies–probably feeders–but whatever type they were, they weren’t cichlids. I was not happy…until my guppies had babies. As soon as I noticed them, I was sold. I mean, a pair of fish breeding in my very own little ten gallon tank?! It was such a wonderful feeling!

That, my friends, is where my fish breeding expeditions began—with a pair of guppies. As time went by, I tried my hand at other live bearers. I got moons, platys, and swordtails. Then I wanted to try egg layers. 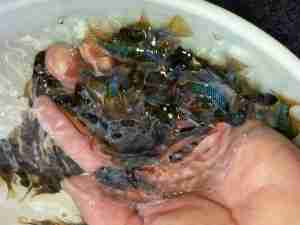 By the time I was 13, I was breeding bettas. I didn’t have great success. The babies were difficult for me to keep alive. I couldn’t control the air drafts over the surface of the water and I didn’t have a way to give them adequate nutrition. Even so, I still got some success.

From bettas, I went to convict cichlids and from convicts I went into angelfish. Angelfish were a delight for me. I enjoyed them immensely! Even so, I still felt like I hadn’t yet found “my” fish.

Although I had been breeding fish off and on for 6 years by the time I got to angel fish and I had been having a blast doing so, I still felt like there was something lacking. I was yearning for a fish that had personality, grace, intense color, and a stunning shape, all into one little package. I hadn’t found that yet. My search continued.

At 23, I was in love with the woman I was soon to marry–and yes, still in love with my fish hobby. I moved from Southeastern Missouri to a mid-sized town called Rogers in Northwest Arkansas. Shortly after the move I made up my mind that it was also a good time to find another fish to breed. So I took what angels and guppies I had–the guppies were some MONSTER breeders that I had at the time–and I sold them a local fish store there called Exotic Tropicals.

For the next few weeks, I would travel to three different fish shops in the area, looking…searching. I kept hearing about how difficult it was to breed this one fish called discus. The more I heard about how difficult it was, the more interested I became. I bought a pair. They were ugly fish, probably culls that should have been disposed of when they were fry. They were low-quality discus indeed, but they were mine and they were supposed to be difficult to breed. 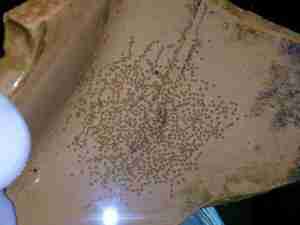 Well, the discus pair spawned for me about a week after I had them. It made me think they were a lot easier to breed than people had been saying. Until they ate their eggs…then they ate their eggs again…and again…and again. Finally, I was starting to understand why people were having trouble with them. It isn’t that hard to get fish to spawn. Getting them to spawn, getting the eggs to hatch, and getting the babies reared up…now that’s the tricky part.

I sold the pair to someone else. Afterward, my mind was bent on breeding discus successfully. As I searched for a quality pair, one name kept coming up–some “discus expert” if you will. His name was Jack Wattley. He was known for a famous strain of discus he had created called “brilliant turquoise.” It was a fabulous fish, magnificent to behold! I gave him a call. I didn’t get a hold of Jack, himself, but the person who answered was indeed the next best thing. It was his partner, Gabrielle Posada. I eventually did get to speak with Jack, but I ended up building a relationship with Gabrielle.

The first pair of discus I bought from Gabrielle was a pair of Royal Blues. They were F2s or something like that and they were very fertile fish. They spawned for me within a week. I had babies on the sides of the parents 5 days after that. It was an AMAZING milestone in my hobby of breeding fish! In fact, I was breeding discus so well for a “beginner” that Gabrielle told me that I had a green thumb for fish breeding. That made me feel great.

I was in absolute LOVE with the mighty discus. It was the most fun I’d had up to that point in my hobby. Somehow, I still wasn’t satisfied. I wanted something smaller; something with…”pizzazz,” if you will. I started dabbling with dwarf cichlids, dorsigias, kribensis, curviceps…and others. All were easily bred and fun, but…all seemed somewhat drab. I just couldn’t put my finger on it. And so I searched.

Until that day. THAT…DAY! I was walking down the isle of one of our LFSs, and I saw it! I did a double take. It stopped me DEAD in my tracks!

Owner: Yep, they sure are. But be warned, if your thinking about buying it. These guys are notoriously difficult to keep.

Me, with a growing smile on my face: REALLY?!!

Little did he know that I wanted something more challenging anyway. I had been dying for something that everyone and their brother wasn’t able to breed at the drop of a hat.

Me: Are they hard to breed as well?

Owner: Hard to keep. Even harder to breed.

And so my ram breeding commenced. Obviously, that is, once I had located a female. I had babies within two weeks after that. I soon learned that breeding rams consistently was the hard part. Over the next few years, I was struggling to breed rams on demand. Just when I would get a few spawns to do wonderfully, the next few spawns would just die or the eggs wouldn’t hatch or some kind of unforeseen problem would come up. It was MADDENING!

After years of trial and error and study and research I finally–for the most part–figured out what I was doing wrong. It had absolutely NOTHING to do with having soft water versus hard water or a low pH versus high pH or ANY of the false information that was put into circulation years ago. In fact, all my rams through the years have ALL been hatched and raised in VERY hard water with a VERY high pH! No…it was something much, much more simple that I had overlooked. Once I fixed that…I was on my way!

Eventually, I was able to breed my rams consistently. As long as I followed my established rules and didn’t cut any corners, my rams produced for me. There are sometimes lumps and bumps along the way, but I am still able to breed consistently.

It took me about three years to get my rams to where they are now. I am still not where I want to be yet, but it’s a work in progress and I enjoy the ride while I’m on it. 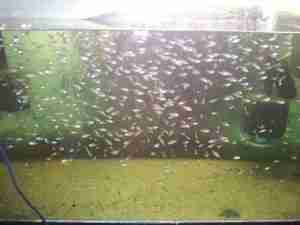 The genetics behind my breeding projects are somewhat of a secret. Suffice to say, my strain has all of the known popular strain “types” out there within their genetic gene pool. Meaning, I have used golds, german blues, electrics, “in-betweens,” and long-finned varieties to get the strain that I have now. I will also say that strong german blue traits and long finned varieties are apparent in my strain. You see, my idea of an ornamental ram should be large flaring, full finned, deep thick bodied, with intense, rich color, a good broad high bodied “torpedo” shape, a small blood red eye and a large body size. I mean, rams of today should be ornamental. They are meant to be eye candy and that sets them apart from wild rams. Wild rams are INCREDIBLE and they have their place within the hobby–ESPECIALLY within our breeding projects–but like discus, they have showy ornamental types that offer more color than their wild could counterparts.

Through the years, I have settled on 3 types of fish. My favorite type of fish–with ABSOLUTELY NO other fish coming close–is the mighty ram. My second favorite fish is discus. My third favorite is the flowerhorn cichlid. A lot of people frown on them, but I could care less. I think a high-quality flowerhorn is the coolest looking fish on the planet. I have bred and raised hundreds.

It has been many years since I have had an interest in dabbling with breeding other types of fish. I have already bred so many different varieties and nothing has peaked my interest like rams, discus, and flowerhorns. Lately, though, I have begun developing an interest in gold nugget plecos, zebra plecos, and really high-quality jewel cichlids. None of these will ever replace my lovely rams or even my beloved discus and flowerhorns. Yes, I think I will breed plecos and jewels one day soon, if the good Lord permits.