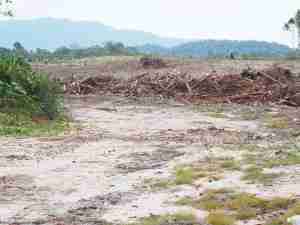 Indonesia brings a lot to the table for plant enthusiasts around the globe.  With the threat of logging and farming looming across every hill and mountain it really should come as no surprise that the jungle is being destroyed at an alarming rate.  Indonesia is home to an amazing array of plants hobbyists keep in terrariums, aquariums, and in their greenhouses, homes, and gardens.

The landscape has retreated some 40 million acres from 2000 to 2012 according to studies done using satellite images.  About 40 percent of that was primary forest.  The difference between primary and managed forest is important to remember as primary forst is more bio diverse, by nature itself.

Sumatra and Kalimantan are reported to lose the most from their lowland and wetland forests, where many plants are suitable for aquarium and terrarium use.  The island of Sumatra alone has lost 48% of its entire natural forest cover since 1985.  Accompanying the freshwater plants there are about 300 species of fish as well.

Sumatra alone is host to almost 40 species of Nepenthes, a carnivorous plant that is very popular amongst collectors.  The surrounding areas host another 40 or more species of these carnivorous plants that utilize cups to capture its prey.  Most species capture insects but some of the largest species collect rats and lizards.  Some cultivated plants have been observed to have captured small birds as well.  Nepenthese lowii found in Borneo is known to have a symbiotic relationship with the tree shrew and the cups are the same dimensions as the tree shrews, whose droppings supply the pitcher plant with nitrogen.

If the deforestation of these kinds of places continues we will obviously keep losing endemic species of plants and animals.   Endemic flora and fauna are found no where else, and once they are gone from these locations there is nothing that can be done for their extinction.  In the last 25 years there have been 422 new species discovered, and more are being found or rediscovered regularly.  Palm oil plantations and logging are the main detrimental effects destroying the forest.  We have known for quite some times that the destruction is happening but it wasn’t quite known it had this large an impact on the area.  Even if we wean ourselves off of palm oil found in many foods and health and beauty aids the jungle will continue to be laid to waste at an alarming and uncontrollable rate.