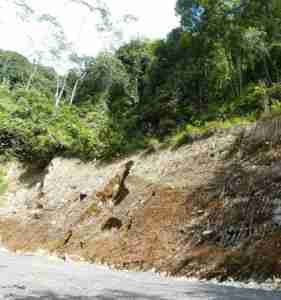 I like Biotope One being a grassroots movement because I am also involved in other local grassroots conservation efforts such as Pericopsis which is a decentralized movement to map every single tree in Malaysia.

I am also in full support of the idea that part of the agenda of Conservation Through Cultivation is to educate other growers (and hopefully laymen) about the threats facing these plants and their habitat. What better way is there to conserve these plants than to have a beautifully grown Drosera burmannii serving as a plant ambassador in their living rooms? Surely it will make them think twice about destroying the ones in the wild.

Conservation through Cultivation is related to an economically sustainable conservation model.  I’m sure you’ve heard of the success stories of Borneo Exotics once they got the paperwork done. Look at how they almost single-handedly saved Nepenthes Rajah. 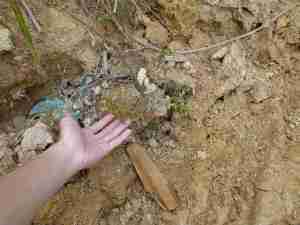 Projects like that include a lot of exploring and documenting which takes a lot of resources however.  From expedition costs such as food and petrol and accommodation, material collection trips, purchasing land, building new grow setups, and everything related to my conservation projects.  I  already need to expand my current indoor CP “farm” with a couple more light fixtures as well as water trays.

Currently I am focusing on the locally endangered/rare genuses Nepenthes, Drosera, and Selaginella.

I ran across a habitat that is being torn down and destroyed for new construction. This place has been surveyed over the past couple of months and has shown exponential degradation with no hope of recovery. The site will eventually be turned into a marketplace, and the slope will be paved with cement for stability, thus killing all the plants on that slope. Native plants on that site include a rare Selaginella sp, N.sanguinea (Cameron Highlands form), tree ferns, and orchids.

I saved a ton of half buried plants, but let us follow the journey of one particular N.sanguinea plant which was saved by conservation through cultivation. 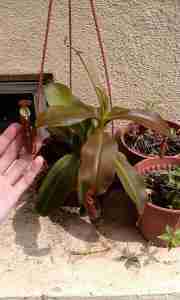 The plant is the one that you see in the last photograph. It is quickly dying because of the sudden change in humidity due to habitat destruction. As you can see the growth tip is already burnt.

I brought it back and put it under intense care with my artificial setup. The extra care consists of grow lights, cooler temps (air conditioning), and a plastic bag for full humidity. In  its indoor recovery stages new pitchers were produced as it recuperated.

After 3 months of intensive care, the plant was gradually placed back out into open sunlight in stages where it could “harden off” to the natural environment again.

I even discovered that this particular individual plant had a unique pitcher morphology, unseen in another other N.sanguinea. All the more reason this one should be saved.

After 9 months of nursing it back to health, it was time to return this plant back to the wild. I took it all the way back up to Cameron Highlands, and chose a protected National Park where it would be safe from disturbances.

This is the final release photo. I will go back and check on it in a few months or a year.

Now I have extended my conservation projects to cover our increasingly rare Drosera burmannii (Peninsular Malaysia form) with only two sites ever being recorded. One of which is in imminent danger of being turned into a housing estate.