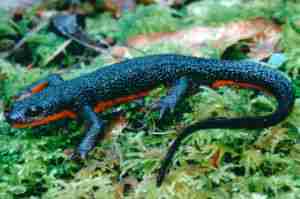 The Rough-skinned newt is a brown salamander with rough skin over an orange underside.  In the aquatic phase of life the males are similar but have smoother skin, enlarged forearms and a flattened tail with a slight tail fin.  Overall total length on average are about 11 to 18 centimeters long.

These newts are the most toxic of land animals on the planet.  They possess a potent neurotoxin called tetrodotoxin or TTX.  The same toxins are used by blue ringed octopus and pufferfish.  This powerful poison is produced by symbiotic bacteria that lives in or on its host.  The toxin must be ingested for its dangerous effects.  However after handling the rough skinned newt avoid touching your eyes and do wash your hands immediately after handling.