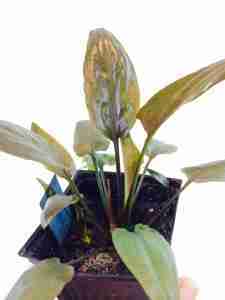 I found this cryptocoryne pontederifolia to be a rather nice large plant.  The form ‘merah besar’ as it was labeled when I got it means big red, which fits this one.  The picture doesn’t really bring out the best of the colors on my phone camera but its a nice color.  It grows fast and is hardy emersed.  This one is running multiple shoots out for new growth and is a happy plant.

Maintaining this one is pretty straightforward and easy in my emersed setup.  I do not have it emersed as of yet though.  The media is 1/2 potting mix and 1/2 mixture of fired clay, gravel, and sand.  It gets its fertilization from both the soil with slow release fertilizer in a balanced formula, as well as weekly shots of a mix of diluted liquid fertilizer.  I use regular tapwater in the bin that it rests in, of a level of about 2 inches deep.  The plant itself is nestled in a 3 inch plant pot and the crown of the plant sits well above the level of the water.

The plants do quite well with only a couple fluorescent tubes in the 5500 kelvin color sitting a few inches above their tote which they are grown and maintained in.  The total distance from the light to the tops of the foliage is about 8 inches or so.  The top is left on the help contain a humid environment, and surely blocks a degree of available lighting from reaching its leaves.  it is not a plant that is overly demanding of lighting.

Using a new shoot excised from the base of a plant in one of the pots it was put into tissue culture.  The new shoot was treated to disinfect it and trimmed afterward in a sterile area to be grown in vitro.  So far it is growing quite well but hasn’t yet started reproducing, as it is still early.  Hopefully it will take off in culture but it grows and multiplies readily emersed or submerged so propagating it isn’t necessarily that difficult.

This is a nice plant, especially for larger tanks and displays.  It is easy to keep and maintain and rewards its upkeep with plenty of new growth that are shown in the reddish hues of its lush foliage.  Definitely worth looking out for especially if you like easy to care for cryptocorynes and other low light loving plants.