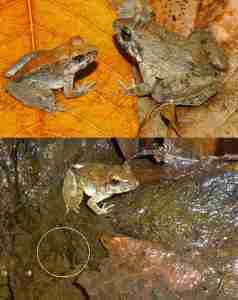 Limnonectes larvaepartus is a newly discovered species of frog from the Indonesian island of Sulawesi.  The newly found fanged frog is the only known frog to give birth to tadpoles.  The majority of frogs lay eggs that are then fertilized and develop.  A few other species can have fully formed froglets.

“Almost all frogs in the world – more than 6,000 species – have external fertilization, where the male grips the female in amplexus and releases sperm as the eggs are released by the female. But there are lots of weird modifications to this standard mode of mating,” said Dr. Jimmy McGuire of UC Berkeley who made the discovery.

“Limnonectes larvaepartus is one of only 10-12 species that has evolved internal fertilization, and of those, it is the only one that gives birth to tadpoles as opposed to froglets or laying fertilized eggs.”

“Sulawesi is an incredible place from the standpoint of species diversity endemic to the island as well as in situ diversification,” Dr. McGuire said.

“The fanged frogs are special because they appear to represent a virtually unexplored adaptive radiation with many species occurring at the same sites but adapted to occupy distinct ecological niches.”

This is an excellent example of the diversity and amount of newly discovered species that are threatened by the encroaching palm oil plantations of that region.  While palm oil plantation deforestation may or may not cause a direct threat at the moment it plays an important role ion the destruction of the forest and endemic species of that region.