Heavy rains hit peninsular Malaysia in December, leading to severe floods that resulted in at least 21 deaths and the displacement of some 200,000 residents in the states of Kelantan, Pahang, Perak, and Terengganu.

Mongabay reported last month that many local environmental groups argued “deforestation may have exacerbated flooding by accelerating runoff during heavy rainstorms.” Now a minister with the federal government is making the same claim — and he says he has proof of who was behind the illegal deforestation.

Datuk Seri Shahidan Kassim, a minister in the Prime Minister’s Department, says he has “solid proof” of illegal logging and land-clearing activities in the Gua Musang territory of Kelantan, Malaysia, one of the five states to have suffered the worst flooding. 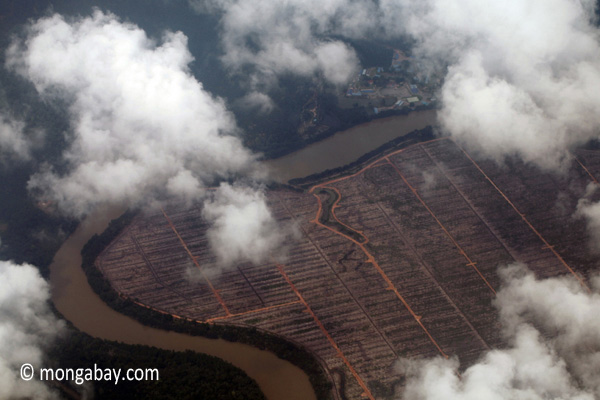 Forest newly cleared for an oil palm plantation in Peninsular Malaysia. Photo by Rhett A. Butler.

“I have solid proof that they were given the Temporary Occupancy Licence (TOL) to clear the land, but the land clearing has gone beyond the permitted areas,” Shahidan said, according to The Rakyat Post. “I also have information on those doing it. Among them are the big businessmen from neighbouring countries. I hope there is a law to take them to court.”

The evidence, according to Shahidan, is a series of photos that “clearly show the situation on the ground,” which he says he will give to Datuk Ahmad Yakob, the menteri besar, or chief executive, of Kelantan.

While Shahidan did not release any of the photographs along with his statement, The Sun Daily has published an aerial photo of the Kuala Betis jungle taken on January 18 which it says “shows the devastation of the forests in Gua Musang caused by unbridled logging and land clearing, that most certainly contributed to the serious flooding in the state.”

Shahidan plans to meet with Kelantan state’s attorney general in order to discuss actions that can be taken to stop illegal logging and prevent flooding. He has already made a variety of proposals in the media, including barricades to monitor who goes in and out of the forests; appointing local Indigenous people, Orang Asli, as rangers; and a requirement that all state governments stop logging for 10 years.

According to Global Forest Watch data, the state of Kelantan lost more than 201,387 hectares (497,638 acres) of tree cover between 2001 and 2012, representing more than a fifth of its forested area. However, it should be noted that tree plantation harvesting is lumped into the data, so it does not denote outright deforestation. Intact forest landscapes, which are large areas of primary forest free of human impact, are mostly absent in Kelantan, but many of those that do remain have experienced degradation since 2000. Click to enlarge.

The federal government of Malaysia takes the issue of logging seriously, according to Shahidan, particularly in the areas hardest hit by flooding, which, in addition to Gua Musang in Kelantan, include Marang in Terengganu and Jerantut and Cameron Highlands in Pahang.

Though Shahidan hasn’t named any names yet, others have come close. Sultan Ahmad Shah of Pahang, whose state has seen several floods over the past few years, said while visiting one flood-stricken area: “Illegal farmers are responsible…They are to blame!”