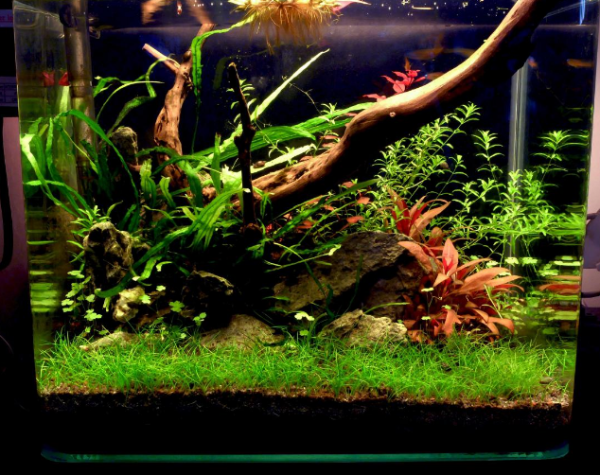 What makes plants grow well in low techs tanks is the right soil, a shallow tank, and in this case, high level lighting.  Excel wasn’t used in this tank and I sat out the algae.  There was a bit of Black Brush Algae and green dust at the 4th week but it died off after a month or so.  Minimal fertilizer dosing was used and a low bio-load with organics in the soil was used to break down and create co2.

I never have had sustained BBA in a low tech tank before. Probably due to a low bio-load and a good water change schedule.  The tank pictured above has a pretty low bio-load. Fast growth equals more maintenance; if not plants shade each other and get crowded.  This will impede flow, cause problems with the lighting, etc. so it makes a big difference.

I have been a bit tardy in keeping track of the low tech tanks. I think the setup matters quite a bit, because there are fewer factors to manipulate in a low tech setup.  I also wanted to do a bit more experimentation so I’ve been trying on tanks with slightly different dimensions and soils.

With the advent of nature style scapes that emulate mountains, scenery, and forests, smaller leaved green plants that blend into each other seamlessly preserves the illusion better than glaring bushes of red plants.  Emphasis is placed on getting the rockwork and landscape illusion right rather than on growing interesting plants. For the same reasons you’ll never see sword plants, lotus, and other large specimen plants in competition scapes. Also a scape that is fun for a hobbyist might not make the best photographs for a competition

A certain amount of CO2 comes from the soil decomposition I believe, and the low tech tanks have very low bio-loads.  The mechanics are similar to high-tech – having more competitive plants means less algae issues. Low tech tanks benefit from being very stable compared to tanks with pressurized Co2. Also I use a simple 24w cfl (compact fluorescent lamp) desk lamp for lighting all the smaller tanks.  They give great adjustability. Higher up for lower light and closer for higher light makes it simple.  It also allows for altering light direction to shine around the hardscape.

The powerheads I like to use are very cheap ones from China, only a few dollars each. I choose them because I wanted something low-power and gentle. These were as small as I could get. 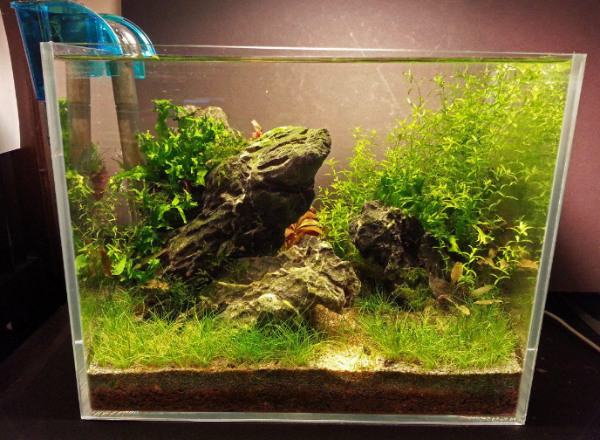 I treat them as disposable; basically run them till they give out and then I change them. Some of them last surprisingly long though.  Flow cycle is important, not only for the sake of flow, it keeps the area clean as well

Filters are a rather weak filter actually and are more for just water movement because the tank size is small and there is a very low bio load as well.  There isn’t anything special about the Hang on Back filters, except that I choose HOBs that have a horizontal flow output.  The water outflow from the filter should travel from the filter outflow horizontally across the tank surface, hit the other side of the tank, then flow downward.  It makes a large impact difference flow-wise opposed to HOBs that produce a downwash straight from the outflow, though it is more noticeable in pressurized CO2 tanks.

Lighting is Important but Doesn’t Have to be Costly

Shallow tanks not only improve gas exchange in general but for shallower tanks lets light penetrate toward the bottom as well. This tank is probably at 80 at the substrate.  Lighting is a Phillips CFL  23w bulb in a warm white which would be around 2700k. The pictures are not color corrected, so they actually don’t look as yellow as one might think.

Higher PAR lighting doesn’t always mean more compact growth. Stem elongation in aquatic plants is mostly due to ethylene accumulation in the meristem.  This is brought about by poor O2 levels in the water or a high CO2 to O2 ratio.  It is connected also to growth rates – and therefore temperature as well.

For the non-CO2 tanks I have organic compost soil capped with an aquarium substrate. There is peat and iron rich clay below the organic compost without additional chemical fertilizers. I pre-soak the soil for a couple of weeks before using.  As per habit,  I add some base fertilizer like Osmocote slow release to the soil. 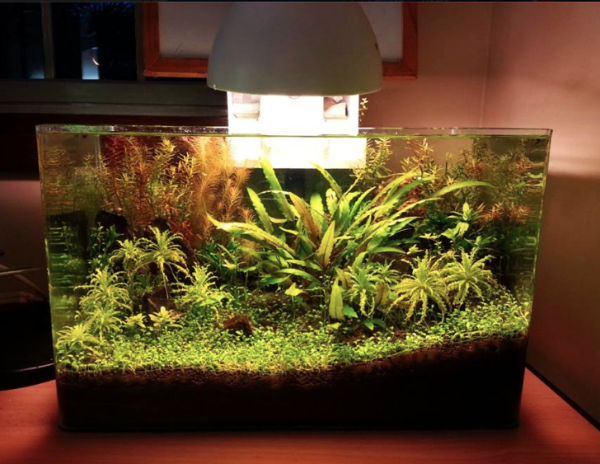 I use a less organic heavy layer for the bottom base where it’s going to be deep, so that anaerobic conditions don’t occur.  This build up layer mostly provides iron.  In the middle layer I use an organic compost.  The very top layer is an Aquasoil cap.  I find that such a setup allows fine rooting, high CEC, yet is cheap enough to set up.

A rough gauge of a mixed soil organic content is how black it is.  The darker it is, the higher the level of organics.  The finer the debris the more decomposed is it. The level of clay can be seen through how sticky it is when it’s wet.  If you can form balls with it then the clay content is significant.

The rest of the variables that are available, like  NPK (Nitrogen, Phosphate, Potassium,) etc., can be estimated through soaking the soil and testing how much is leached into the water column.  I prefer slightly acidic soils. For high tech tanks I use leaner soils with less organic content while for low tech tanks I use a higher organic content soil.

The temperature of my tanks are quite warm though (it’s the tropics here) and all tanks run about an average of 80 F, with highs of 84f-86f.  It’s not a static system though, dosing changes as plant reaction changes. For example if I see GSA on the glass, I’ll increase phosphate dosing.

Most of the nature style amano scapes that many people fancy are largely green heavy. It’s just that it’s hard to grow carpet in low tech.  My low tech carpets take about 3 months to grow in.  After they have grown in I maintain the scape for a year or so before changing.  Avoid algae by having a very low bio-load and healthy plants.  This goes the same for my high tech tanks.

Use anubias, crypts, moss, ferns, and other low light less demanding plants.  Dwarf Hair Grass is good but requires quite a bit of light.  Hemianthus glomeratus also known as baby tears or pearlweed work well in a low tech set up.  Obviously java fern and anubias combination do well also. Alternanthera Reineckii is okay but shouldn’t be shaded.  Sword plants are good choices for larger plants and there are a variety of them.  Most mosses do well as they have requirements that are easily met in a low tech tank.

However, depending on how the plant growth shoots form, not all are suitable for pruning into dense bush form. Rotala rotundifolia/wallichi, Hemianthus glomeratus, Ludwigia arcuata/brevipes, Limnophila aromatic/vietnam are some examples of plants suitable for dense background bushes. Ludwigia repens is one of the worst; it grows wide and open with large flattish leaves. Some others like Rotala macrandra/Ludwigia pantanal prefer to be unshaded, and doesn’t form a lot of side shoots (and look nicer with a single large shoot).

It’s a combination of trimming off the tops to a height that I want, and pre-emptively pinching or cutting off tips that start to grow towards a direction that I don’t want it spreading to. For many stem plants if the rooted stem is quite strong and healthy, then the top can be trimmed off repeatedly. Often side shoots sprout fast. 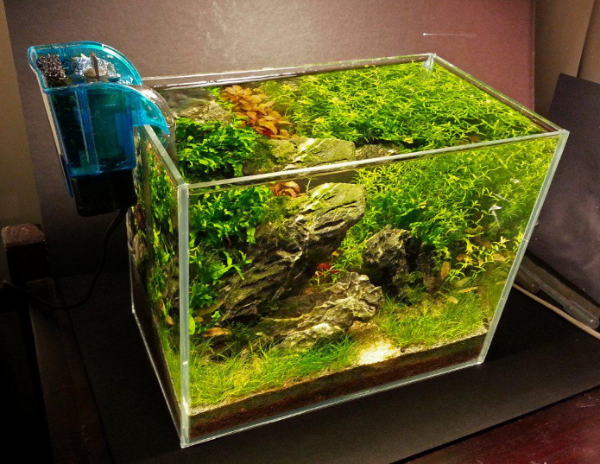 About every 4 months I allow the current batch to grow longer, then do a replanting of tops (where the top node to bottom has no branching).  I think that trimming and allowing side shoots to sprout allows more self-organization (because the plant will grow in a way that doesn’t shade itself that much), it makes for a neater, denser bush.
Replanting tops kinda resets the plant form to be competitive against surrounding plants. In the search for neater tanks I’ve been doing a lot more pruning and almost no replanting for tops until after many months.  this is just a theory based on observation though. It seems to apply to other plants as well.

Low tech planted tanks are cheap to set up as well as easy.  During the initial months growth, quality, and speed are quite similar to some high tech setups.  Long term though the growth effect runs out after about 9 – 11 months from setup.  I have tried before to know the effects of course; and it begins to suffer the same way as when high tech tanks run out of CO2.  Poor growth, it becomes sparse and less dense, some species don’t do well, then algae starts to appear.

To learn more about ethylene elongation you can read Ethylene-promoted Elongation: an adaptation to submergence stress by Michael B. Jackson Oxford Press.